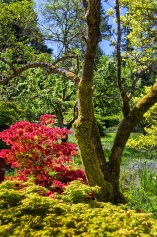 We wanted to visit Milner Gardens on Vancouver Island for quite a while, but as it is advertised to have hundreds of rhododendrons – we waited for late spring to see it in its full glory. The whole estate on its 70 acres of land was created around 1930 by an influential family of General Noel Money. At the heart of the estate stands an attractively designed house, built in style of old Ceylon colonial buildings.  (This fine house instantly reminded us of Castle Grant and Sunbury Plantation House in Barbados – places we presented in our book Tropical Homes of the Eastern Caribbean).

Soon after the house was finished, the whole estate was sold to Ray Milner of Edmonton as a summer house. When in mid-fifties Ray married Lady Veronica FitzGerald – a British aristocrat from very influential family – the works on their large garden begun. Lady Veronica knew many fine British and Irish gardeners including Sir Frederick Moore, developer of gardens at Mount Usher. Using his works as inspiration, she created her Wild Garden secluded in an old forest growth, and overseeing calm waters of Qualicum Beach area. 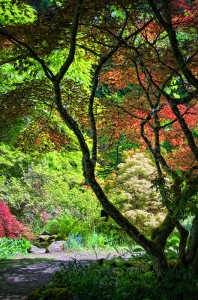 It surely was very impressive and grand garden concept.  The winding road comes through wild forest to suddenly enter colorful area of blooming trees and bushes, and then leads to open space with a picturesque house overlooking wide ocean shore. Lady Veronica – and artist and painter – used her garden as inspiration for her works, opening it often to host other artists. The garden also remembers many prestigious guests, including several members of British Royal Family. Wishing to preserve the beauty of her garden for future generations, before her death Veronica generously ceded it to Vancouver Island University with intention of opening it to general public. 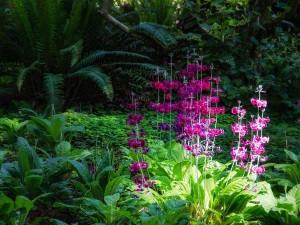 Now it is open to visitors by a rather steep $10 admission, advertised as Ancient Forest and Garden – perhaps to attract more paying guests. While the forest surely is old and beautiful, it is located in generally forested area and just a short drive from the famous Cathedral Grove, where one can see much more impressive and older forest for no admission fee.  Similar forest can be also seen on many hikes on Vancouver Island – but forest or no forest – we were eager to see the garden. So, we went through the shadowed path winding between old trees, and in some five minutes arrived at the garden gate.  It really lives up to its name of Wild Garden, as it blends with forest quite significantly.  We enjoyed some beautiful, old rhododendrons growing between huge trees, including some rare and impressive big-leafed species. Garden path passed little pond and descended slowly towards the house covered with wisteria.

Scented azaleas and magnolia trees surround the beautiful colonial house welcoming us with typical colonial style impressive, wide stairs. It now serves as a special venue and a tea house. The view from the front of the house is truly magnificent. Wide ocean shore is visible over juicy-green lawn. Narrow paths and nooks surround the lawn creating charming hiding spots for enjoyment of visitors.

However, despite undisputed charm we couldn’t stop to feel a sense of neglect to this place, that hard to describe impression that “the days of glory are over”. Many little details suggested skimpy maintenance, some trees and rhodos seemed overgrown and in need of trimming.  Many spots would do with some weeding.  Despite several gates to “keep deer away” we noticed deer grazing just at the house between magnolia trees – which is the heart of the whole garden.  One can argue that a wild garden should be left alone and live its own life. Of course – it is right, but to some extent. And, if it feels like in need of maintenance – it often simply is. We hope our $10 per head will be put to good use, and the garden will be well preserved for future generations as it should. Still a beautiful place to visit, but would Lady Veronica FitsGerald-Milner approve its keeping?  We can only guess…