Written from a point of view of pro photographer/videographer in hope to give others some insight about shooting there.   PART 2 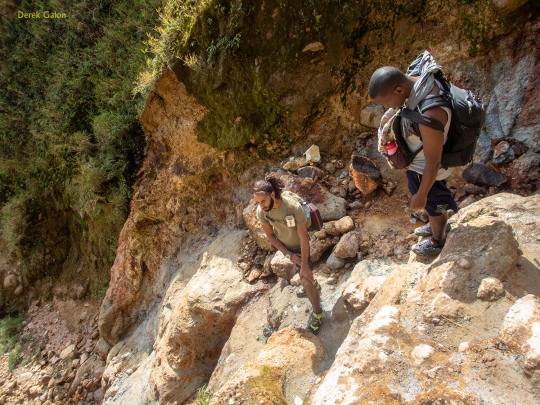 Indeed, our path became narrower and went sharply down, exposing rocky hills of our mountain.

=======
Indeed, our path became narrower and went sharply down, exposing rocky hills of our mountain. A bit muddy, as it was – I was told we are really lucky that several dry days kept this place really tidy and less slippery than it often is. I had to watch my step, and Nahjie leading our group had to point me to the safest steps and stones. Still, even there we had to stop, unpack my camera, and – selecting proper lenses – I took another series of photos. Amazing deep red rocks, rugged terrain and deep green flora created yet another amazing view. 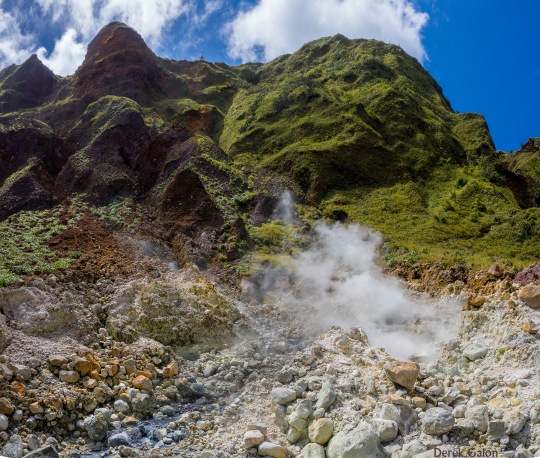 In Valley of Desolation

Soon after, passing another bend of our narrow and very exposed path, I noticed a remote and constant, unusual sound. A sort of deep hiss. A bit of a gargle too. Not really a stream, not wind – what is it? All became revealed to me after another bend. The Valley of Desolation! Deep under our path, it steamed with hot water splashing from under white volcanic rocks. 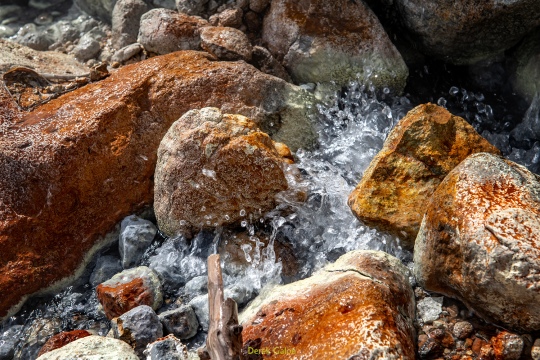 Quickly forgetting that I started to feel a bit tired, I followed Nahjie through some slippery and exposed boulders, and we descended to the valley.

Time for a break. At least for Nahjie and his friends. For me, it meant start of my real work. Unpacking equipment, photographing, filming, and flying my drone. Scenery indeed looked worthy my efforts – hot steam, hiss, splashes of boiling water – all around me. Remarkable intensity of nature’s powers. 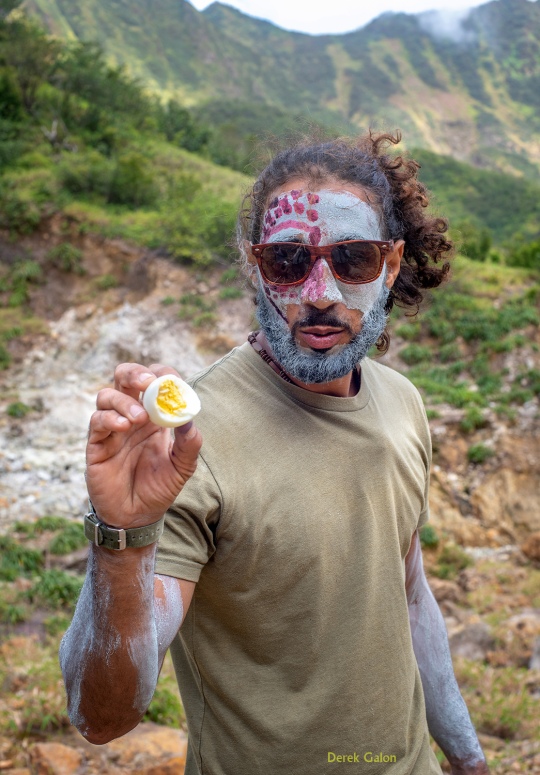 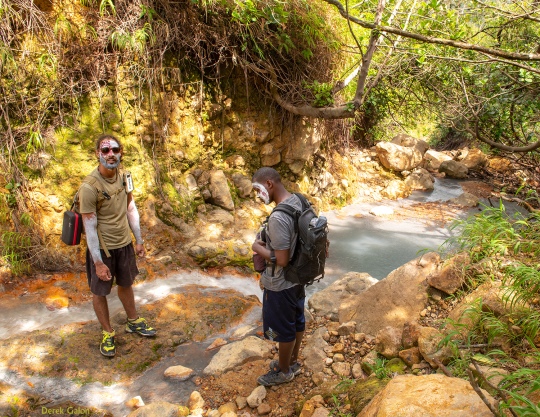 Time flew fast, and we had to continue on our path. And just now – at least to me – the real wonders started to appear. While we had amazing views and the Valley definitely made strong impression on me, little gems started to appear now on our way to the Boiling Lake. 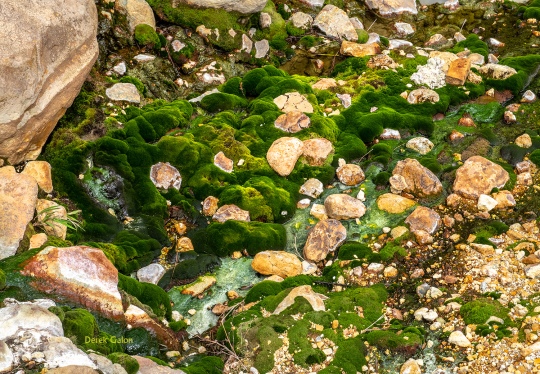 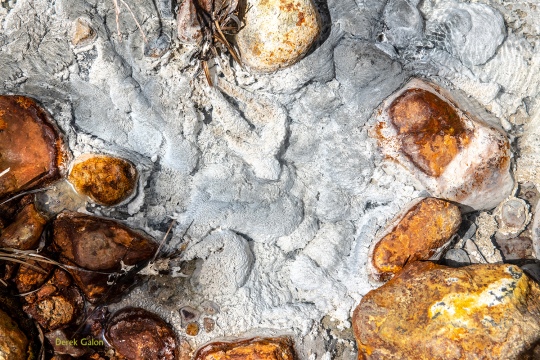 Colourful mineral pools with yellows, oranges and whiles, blended with the black of liquid carbon oozing through the surface. Like little pools of jewellery were greens of lush moss blended with emerald deposits of volcanic minerals in another pool. 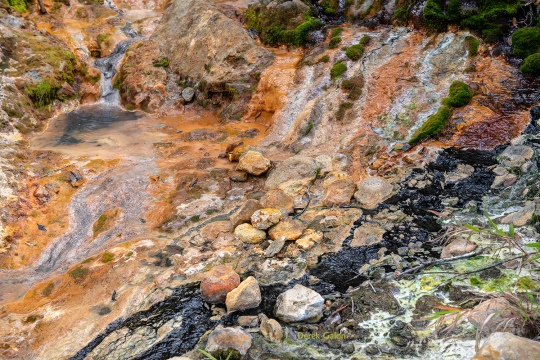 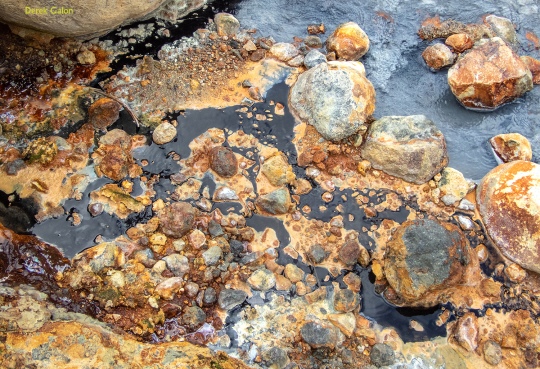 Another spot brought to mind beautiful dwarfed world of Fairy Glen from the Skye Island in Scotland. A miniature waterfall splashing to a tiny pool below, full of opal-white volcanic water. Set in deep orange rocks and some greenery, it seemed a perfect place for a gathering of elves. 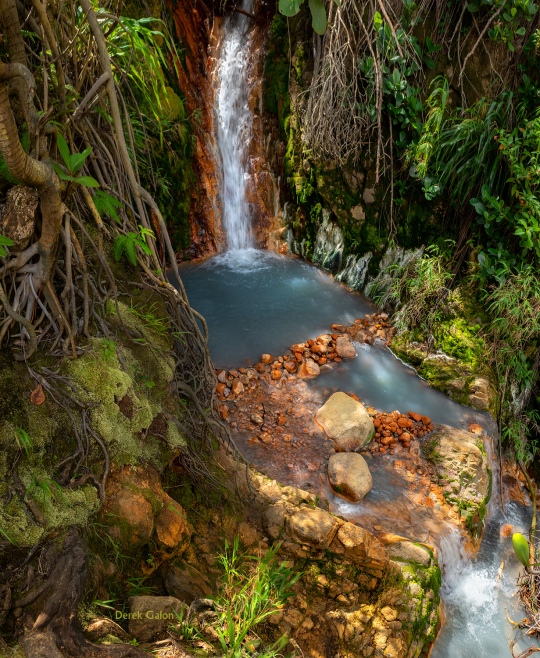 I just had to keep my cameras out of backpack, which proved tricky at some points as the hike here had its moments. Nothing drastic, but a bit more challenging and often requiring both hands. 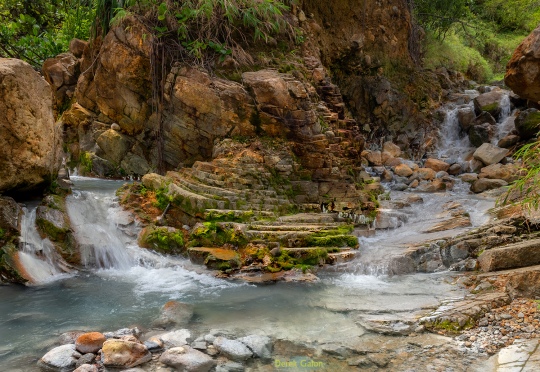 But hey – “look back” – called Nahjie. I did. And – another surprise. A miniature wall of cracked rocky wall between two streams. It looked like a tiny miniature of Colorado mountains, but with a twist of the hot white water. Soooo cute!

To me, the biggest hike’s highlight was just that – these little gems between Valley of Desolation and Boiling Lake. I would spend there a whole day photographing and filming. But – we had to push on. 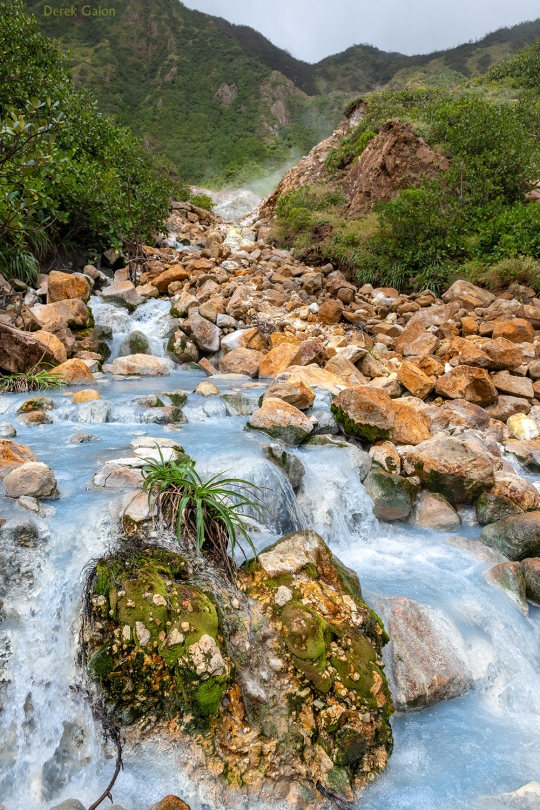 third part of this story is coming very soon, check back for more.
Thank you for stopping by!