Written from a point of view of pro photographer/videographer in hope to give others some insight about shooting there. 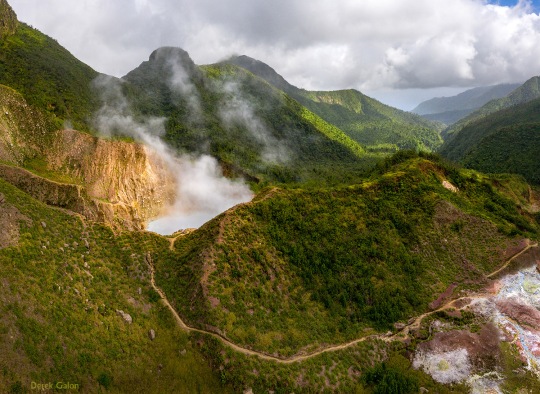 Boiling Lake, Dominica. Second largest in the world after one in New Zeeland.

========
We started early, just after sunrise. The idea was to have plenty of time to stop on our way and take photos. Walking through the forest, four of us felt refreshed and happy. Subtle early light filtered through jungle’s canopy as we were leaving behind the Titou Gorge. We were on our way to the Boiling lake, perhaps the most famous, but also one of toughest hikes in Dominica. 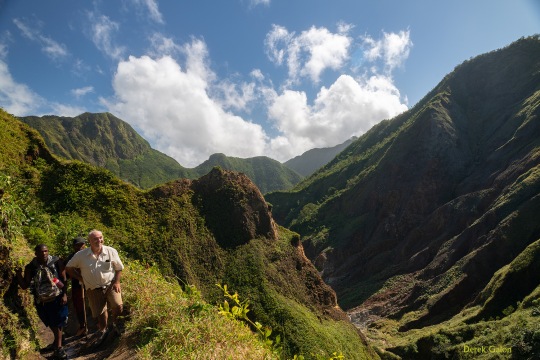 On trail with my friends.

Nahjie, my friend and a legendary adventure guide from JustGoDominica.com, along with his two young and brisk colleagues, dictated the pace of our walk. As the hike is quite long, it is important to manage speed and energy, to have enough for safe return. As we approached the Breakfast River, I heard long song of a Thrush high in hills above us. How delightful – I didn’t hear these birds since the hurricane Maria! Clearly the mountains of Morne Trois Pitons National Park are doing well. Once we reached the horseshoe shaped top of the hill and had a look around from the narrow ridge, the magnificent view confirmed that forest is indeed doing well. Flickering river deep under our feet, lush trees and tree ferns all around us. Rich, deep greenery as long as you can see – up to the coast of the Caribbean sea.

It was a good idea to start early. The views were far too nice not to stop and take elaborate photographs. While I photographed and flew my drone, we were passed by two small group of French tourists speeding towards the Lake. Express teams, I thought. As for me, I much preferred to have time to look around, film and photograph than hurry to the destination. Day was unfolding beautifully, and wide vistas were simply breath-taking. 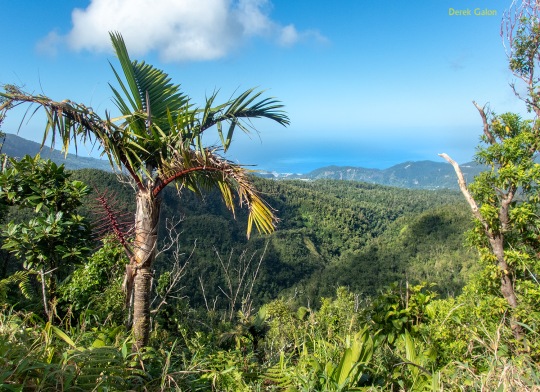 Roseau far and down below us, and endless green mountains at every angle.

After another hour or so, we arrived at the small plateau at the top of mountain. Surrounded by short, dense vegetation which seemed to be a cross between tropical and alpine, I had another chance to look around. The most amazing view I can remember. A 360 degree panorama, with Freshwater Lake area on one side, Roseau far and down below us, and endless green mountains at every angle.

Taking more photos, I couldn’t resist also shooting wide panoramas made of many overlapping images, in hope they will give the justice to these magnificent wide-open views. A first glimpse at the Boiling Lake far away on right side.

Taking more photos, I couldn’t resist also shooting wide panoramas made of many overlapping images, in hope they will give the justice to these magnificent wide-open views. Nahjie pointed me to one direction. “Can you see that cloud in the forest? – he asked. “It is the Boiling Lake and it’s steam”.
Ouch, while it looked intriguing, it also seemed to be quite far away, and meant only one thing – lots more of the hike ahead of us. And – as I was told – the easy part just finished now, with things getting a bit more tricky from now on.

Photographing landscape, about half-way (the easier half!) to the Boiling lake.

Second and third parts of this story are coming very soon, check back for more. Most interesting photos about to come!
Thank you for stopping by!